The world was hushed – the kind of silence that happens only after a snow, when all the usual noise gets absorbed and the quiet is as crisp as the air. The trail at Kellys Run Nature Preserve was iced over, which forced me to go slow and savor. The façade of leaves was gone, revealing the underlying skeleton of the forest. Things normally hidden became obvious. 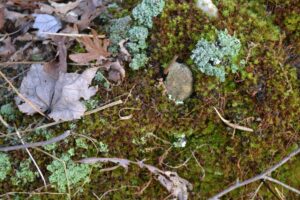 The sun warmed schist bedrock outcrops and melted the thin crust of snow. Olive, teal, emerald, turquoise and shades of green yet to be named poked through as the mosses and lichens were uncovered that created this palette. Mosses are primitive plants that play critically important roles in nutrient cycling and soil stabilization, but I appreciate them for the beauty they bring to the world. Lichens aren’t plants. They are a partnership between a fungus which provides the structure, and a bacteria or algae that provides the photosynthetically derived nutrition, though our thinking on what exactly lichens are is changing. Nature always has its mysteries. 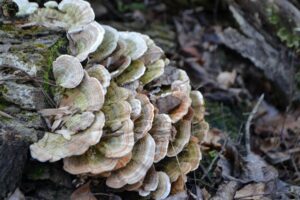 Turkey tail fungus flare out of a log in concentric lines, perpendicular to the soggy surface. White, brown, caramel, and orange bands followed the scalloped contour of the fungus that look like small oyster shells wedged halfway into the rotting log. Another organism that performs incredibly important ecological roles – freeing nutrients locked in decaying wood so they can be used again. Today, I appreciate it more for its aesthetic contribution than its function.

I inched further down the trail, as the sun turned the ice glazed rocks silver. It’s slow going in order to stay upright, which let me absorb this magical place even more. The deep green of the rhododendron popped against the white snow blanket, and I felt like I was traveling into an alternate world as I walked beneath rhododendrons that towered over my head. I think J.R.R. Tolkein must have been inspired by rhododendron glens when he wrote The Hobbit.

I heard a faint tapping through the woods. It was the only sound, and I followed it until I saw motion. A hairy woodpecker used his bill to flick pieces of bark off a dead branch as he looked for insects to eat. Hairy woodpeckers are projected to be one of three woodpecker species native to our area that will be negatively impacted by climate change. The National Audubon Society predicts a 78 percent loss of its summer range by 2080. It is really hard for me to imagine a world without woodpeckers so I focused on staying in the moment, absorbing the experience of being close to this male hairy and burning it to memory. 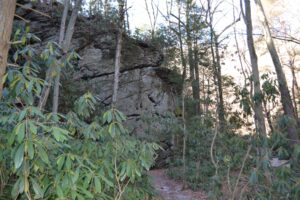 A rock outcropping along the trail

The icing conditions on the trail got worse as I approached the creek that formed this incredible gorge. Such a tiny stream to influence the landscape in such a grand way. A good reminder for those toiling in the trenches. Persistence pays off.

I emerged from the forest into the pollinator meadow and right there above me, hanging from the branch of a locust, was a basketball-sized bald-faced hornet nest, though the masterminds behind this creation are wasps and not hornets. These are sometimes called paper wasp nests because they are made from wood fiber the wasps chew and combines with saliva to produce the paper like material used to construct the nest. This nest is just another natural gem concealed by leaves in the growing season, and in plain sight in winter. I have hiked this trail, beneath this locust, at least a dozen times through the summer and fall and just now saw this engineering masterpiece. I could even make out the varying shades of grey that swirl through the covering of the now abandoned nest.

The sun melts the snow on the schist bedrock which watered the moss and lichens, who enrich and hold the soil in place so the trees and rhododendrons can grow. The stream cuts through the bedrock to form this deeply shaded gorge which provides the right conditions for this magical thicket to form. The turkey tail fungi grow from a log formed by a combination of water, light, and nutrition in the soil, to return it to its origins, releasing nutrients back into the soil so they can be taken up by a living oak. Bark beetles eat the layer between the bark and wood on a branch of a tree and a hairy woodpecker grubs them out for a wintertime meal. The bald-faced hornets rasp wood from the log, meadow vegetation and rhododendron bark to make their marvelous nest. The nest may be vacant, but the wintertime forest is far from empty. It is full of connection.

All photos by Keith Williams.