This edition of Nature Notes comes to us from Keith Williams, the Conservancy’s new Community Engagement Coordinator.

When I first visited Climbers Run Nature Center, I was welcomed to this special place by two large trees just uphill of the parking area. In a way they defined this preserve for me ever since that first visit years ago, these sentinels watching over the valley.

The first is an enormous sycamore, much wider than I can get my arms around. Four outstretched-arm spans wider in fact. Spreading thick boughs, covered in mottled cream, tan, brown, and grey flaky bark, define its crown. And while there are a few dead branches, it is healthy for now.

The second, a multi-stemmed mulberry, was not faring so well. It’s hard to tell if the trunks were different leaders that grew out of a coppiced stump or if they were branches that all turned up competing for light. Regardless, the multiple trunks made this mulberry, which was a little more than half as wide as the sycamore, (two and a half outstretched-arm spans wide), look scraggly in a regal kind of way.

A Dead Tree, Full of Life

On a recent trip to Climbers Run, I knew that this mulberry was due to be felled in four days’ time, so I was intentional about spending time with this regal tree.

A red-tailed hawk soared over the crown 90 feet above. The sun glowed red through her tail and white translucent through her wings. She almost landed on the uppermost branch but changed her mind last minute.

Spider webs glistened in the sun, gossamer silks that wafted in the stiff breeze. They lead my eye to a nest stuffed into the hollow of a low branch, accessible through just a narrow inch-wide canyon window through the dead wood. Whoever constructed this vacant mass of dried grass must have been small, and I imagine it was a bluebird, or maybe a Carolina wren. But I can’t be certain. The mystery sits well with me. 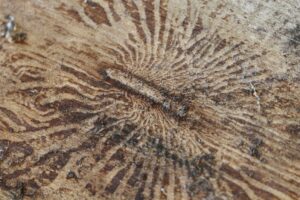 The bark sloughed off a large branch that recently came down and propped itself against the main trunk, with the help of gravity. Bark beetle galleries engraved into the exposed wood looked like petroglyphs or maybe Nazca lines. I couldn’t determine the species, but I could tell the reproductive strategy they used. The wider deeper central cavity, the nuptial chamber, was etched by a monogamous female. This is where she laid her eggs. The thinner lines that spaghetti off the main hollow carved by their mamma are the paths left by the larvae as they ate their way out. 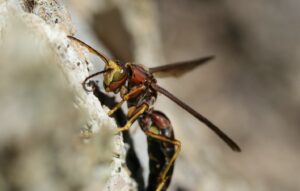 Dozens of wasps glowed in sunlight as they flew between the multiple trunks. I wondered what they are searching for – I guessed it was food to prolong their lives. Most wasps don’t survive winter, not because of cold, but rather because of starvation. It chilled down the previous night and they seemed a little frantic. The wasps knew their end is near and were scrambling to find insects and nectar to hold off death, or maybe to supply their mated queen, who will survive the winter and start the new colony in the spring. Working for the greater good, even in the face of death. There is a lesson in there for us.

Almost perfectly horizontal lines of neat holes drilled into the bark were the sapwells of sapsuckers. They were bored into the mulberry while it was alive. Sapsuckers are robin-sized woodpeckers who lap up the sugary tree sap from the bottom of the holes they drill, along with any insects who might get trapped there. Other woodpeckers, like the red-bellied woodpecker I’d been watching, with his clean red swipe down the center of his smooth cream white head, would dismantle this tree in death if we were to leave it standing. 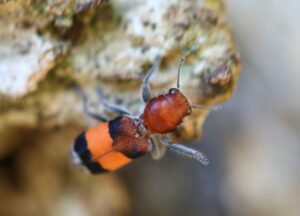 A beetle, with a hunter orange stripe across her wing elytra, rambled over the lunar landscape that was the tree’s deep furrowed bark. This orange banded clerid beetle resembles a velvet ant which has a nasty sting. The mimicry serves the stingless beetle well, as she hustled over the crumpled bark with little apparent care of being eaten. A jumping spider hopped into a cranny to get away from me. Moss and lichen grew on the shaded side. A spotted lantern fly, the newest invasive insect addition to this ecosystem, climbed in the bark crevices.

The dead tree gave bittersweet, an invasive vine, and poison ivy, a native, a scaffold to climb. A dense horizontal spider web formed a trampoline platform shelf and its builder had an insect meal bundled up in silk, like a mummy.

A Tree Whose Time Had Come

I sat beneath the mulberry and admired the life dependent on this dead tree and hoped a branch wouldn’t fracture in the wind and come down on me – which is why we needed to take this tree down! If this were in the woods away from people we’d let it be the standing habitat it is in death. This mulberry died in the last year for reasons unknown. The hazard it presents is too great to let natural decay happen while the tree stands. It is too close to the parking area and people.

I will miss the mulberry now that it’s gone. It has been, and will be, part of this landscape for much longer than I. The mulberry-less view from the parking area will take some getting used to.

Steve Mohr, the Conservancy’s Preserve Manager, has a theory that makes the most sense about the origin of the mulberries multiple leading stems: the tree snapped somewhere in its distant history, due to ice or wind, which resulted in this thick spindly growth.

“It’s not a champion mulberry, but it sure is a big specimen,” Steve said as he surveyed the crown for dead branches that may come down on him when he starts the cut.

It didn’t take long for the tree to fall, relative to the time it took to grow, and for us to lop off the limbs and dice up the rest into fire wood sized chunks, that will be used for future nocturnal programs to connect people to this special place in profound ways. It always amazes and scares me how fast decades of life can be reduced to saw dust. 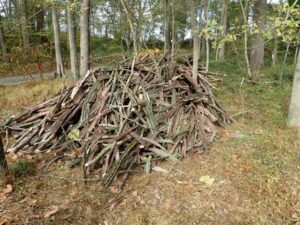 However, there is more left of this particular tree than sawdust and firewood. We intentionally kept most of the branches intact so that we can construct brush piles. Brush piles are exactly what they sound like: logs and branches piled to provide shelter for a variety of organisms – from insects, like beetles and ants, to small and medium sized mammals, like mice and maybe a skunk. Birds will use these piles for food and shelter, and I imagine woodpeckers will start tearing into the wood as soon as the insects set up shop. I’m hoping the piles will attract some reptiles too. Maybe a black rat snake and likely a garter and ring-necked snake or two.

But first, this tree will help educate people about the importance of biodiversity, and how habitat dictates that. Biodiversity is the number of different species in a given area. Diverse communities, whether they be ecological or human, are resilient. They can withstand disturbance and recover. As we lose diversity, our ecosystems become more brittle, are less able to withstand stresses, and are more likely to fail, to cease functioning.

Twenty-five scouts and their leaders gathered on a drizzly very warm for the end of October, Saturday morning in the field where the carcass of the tree lay. We talked about the tree in life and the services it provided: oxygen, food, habitat. We talked about the tree in death and what it provided: habitat, shelter and, indirectly, food. And we talked about the problems facing the planet today: climate change, and the loss of biodiversity. I explained what brush piles were, and why they were important, and that our objective for the day was to move firewood sized pieces to the woodshed and create two brush piles with the rest. Then I left it to the scouts to figure out how they wanted to do that. The senior patrol leader efficiently divided the scouts into two brush pile teams and a firewood team, and they were off. I had a hard time keeping up.

In two hours’ time, the tree was placed in her final resting places, whether that was the firewood pile, or the brush piles. The process was complete, for now, and this set other actions in motion. If the mulberry’s wood was in the firewood pile, her base elements, – carbon, sulphur, nitrogen, and the other stuff of stars like nickel and iron – will soon be liberated as it burns to illuminate nocturnal programs here at the center. The brush piles will melt into the earth more subtly but starting immediately. Insects, like beetles, who facilitate decay, along with other arthropods – isopods, millipedes and predatory centipedes, will move things along. Fungi, whose white mycelia filaments already permeate much of this tree, will continue to proliferate, especially with all the newly exposed wood of the saw cuts. I look forward to tracking the flush of different mushrooms, deciphering the stories of the insect trails carved in the rotting wood, and the drill holes left by the woodpeckers trying to eat them. Identifying the burrows of mice, skunk, and fox and just celebrating the biologic parade as it progresses through the brush piles.

Biodiversity is the point. We are losing it; the Conservancy is protecting it. So is this tree in death.

We gathered in a circle around the ground level stump. I asked the scouts to encapsulate their experience in one word. No repeats. I heard hard work, work ethic, teamwork, habitat, fun, inspiring.

It’s just a mulberry tree. And yet look at its degree of influence. Not only on the ecology of this quarter acre patch of ground, but the influence this tree has had, and will continue to have, on life here, on biodiversity, on these scouts. We should all be so lucky to have such a large sphere of positive influence as this one, regal, mulberry tree.