The eradication of noxious ailanthus trees throughout Conservancy preserves is a marathon – not a sprint. The Conservancy is committed to and has the stamina for this long fight! We are pleased to report that we have “won” a battle at Climbers Run, one of our community’s most treasured preserves.

In this article, Dave Myer, a part-time land steward at the Conservancy, tells the story of the ailanthus tree, and the war being waged against this invasive species on the Conservancy’s preserves. 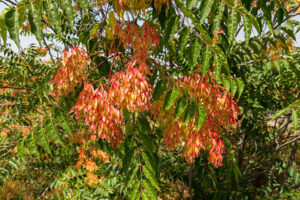 Ailanthus altissima, commonly known as Tree-of-Heaven, was brought to the U.S. from China in the 1700’s as an ornamental shade tree. As a non-native it quickly became one of our most prevalent and invasive noxious trees for several reasons:

It is also allelopathic, meaning it creates a chemical that is detrimental to other plants and organisms, such as native plants, whose growth can be suppressed by a neighboring ailanthus tree. To make matters worse, in recent years we have learned that the ailanthus is the preferred host tree of the spotted lantern fly, yet another invasive species having a detrimental impact in this region. All of this has earned ailanthus its Class B Noxious Weed classification by the Pennsylvania Department of Agriculture.

When I started in 2007 with the Conservancy, we were just beginning to manage ailanthus on our preserves. It was very prevalent at Turkey Hill, Reed Run, Houserock, Holtwood, Homewood, Steinman and Trout Run, Texter Mountain, Safe Harbor, Upper Hopewell Forge, etc. I supervised the first summer college student stewardship crew and we began killing ailanthus trees, an effort that has continued ever since. 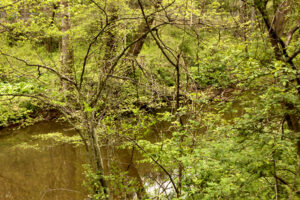 Ailanthus was prevalent in the understory at Upper Hopewell Forge.

Since ailanthus cannot be killed by simply cutting (they sucker or re-sprout from stumps and roots), we learned from experience that they must be treated with a systemic herbicide to injure/kill the root system. We typically use what is called the “hack and squirt” method, which involves making several cuts that reach just inside the outer bark. Then applying the herbicide into the cuts immediately so that it will translocate down into the roots.

When we acquired Climbers Run in 2012, there were ailanthus trees throughout much of the property. We felt that it was especially important to manage this invasive on this property since Climbers is the Conservancy’s Educational Center and is so heavily visited. We began by eradicating the large “mother” trees which produced thousands of seeds, and every year since then have continued to work on the multitude of smaller trees and seedlings.

We are proud to announce that as of September 2021, the eradication efforts have been completed at Climbers Run Nature Center. Now we do expect that some sprouts may require spot treatments here and there in 2022, but we still want to take a moment to pause and celebrate this victory in the midst of our marathon of invasive species management.