When the Pennsylvania Game Commission released an alert on July 1 announcing the mysterious bird deaths occurring in our area and beyond, and made the recommendation to remove bird feeders and bird baths, the Conservancy removed the feeders from our popular bird cam* at Climbers Run Nature Center. 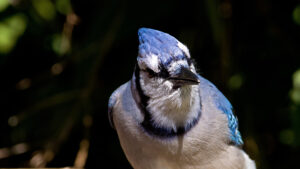 Fledgling blue jays are one of the birds most effected by the mysterious illness.  Photo: Mike McKinne

While research continues into what is causing the mortality of thousands of birds in numerous states including Washington D.C., Maryland, Virginia, West Virginia, Kentucky, Delaware, New Jersey, Pennsylvania, Ohio, and Indiana, the Virginia Department of Wildlife Resources released information on what is NOT causing the devastating event: Salmonella and Chlamydia (bacterial pathogens); avian influenza virus, West Nile virus and other flaviviruses, Newcastle disease virus and other paramyxoviruses, herpesviruses and poxviruses; and Trichomonas parasites.

For now, the Pennsylvania Game Commission recommends the following until more is understood about this event: 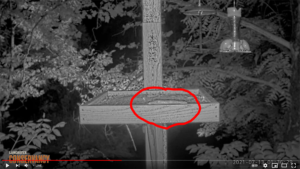 Since hummingbirds do not appear to be affected by the disease, the hummingbird feeder remains intact at Climbers Run and while they may not be as colorful as a hummingbird or cardinal, these large slugs discovered on the camera at night are intriguing at the least – you never know what else you might find making an appearance at your own now empty feeders!

As for the birds at Climbers Run, do not fear – they will not go hungry! This 113 acre property is abundant with native plants and critical habitat that provide shelter and plentiful amounts of food. This current situation underscores the need for all of us to work quickly to protect native habitat – both by saving our remaining tracts of natural land as the Conservancy does, but also by planting native plants at home! Native shrubs and flowers will continue to feed bird species the food they have adapted to eat over time in a safe and dispersed way, unlike the close corridors of a feeder. 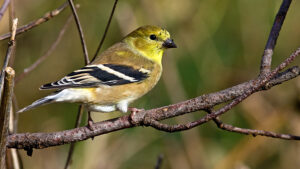 Planting native coneflower in your backyard is a great way to continue to feed birds like the American goldfinch. Photo: Mike McKinne

As Doug Tallamy describes in his book, Bringing Nature Home: How You Can Sustain Wildlife with Native Plants, “Chances are, you have never thought of your garden – indeed, of all the space on your property – as a wildlife preserve that represents the last chance we have for sustaining plants and animals that were once common throughout the U. S.  But that is exactly the role our suburban landscapes are playing and will play even more into the near future.” You can learn what native plants provide food for different species of birds and pollinators at the native plant finder from the National Wildlife Federation and additional tips on creating a backyard habitat from the Conservancy’s Community Wildlife Habitat initiative.

*NOTE: Lightening during a recent storm caused an electrical surge that damaged the Bird Cam. The Bird Cam will be offline until a replacement is purchased and installed. The Stream Cam (where you can still catch sight and sound of many birds) can be viewed at https://youtu.be/NK3hl2u-zRM