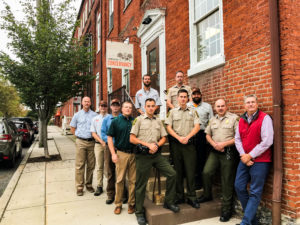 The majority of the Conservancy’s nature preserves have been open to hunting for many years; in fact, the Lancaster Conservancy began 50 years ago (September 17th, 1969) as a grassroots movement of hunters and anglers determined to save the remaining natural landscapes of Lancaster County. Amongst other celebrations, the Conservancy is honoring these roots by enrolling approximately 80% of its in-fee portfolio into Cooperative Agreement with the Pennsylvania Game Commission (PGC).

As one of the largest natural-lands owner/manager in Lancaster County, the Conservancy is on PGC’s radar as a top partner. But the relationship is collaborative and the benefit is mutual. The Conservancy, by utilizing public funding to acquire properties of forest and meadow, not only strives to – but is also mandated to – open its preserves to the public… and it does so 365 days a year after year after year into perpetuity.

As a private, non-profit organization, the Conservancy has limited resources, especially in way of enforcement; yet, it remains committed to the success of managing its nature preserves with a balance between habitat and functional ecosystems with passive recreation management. Hunting, as an outdoor recreation opportunity and as a management technique helps the Conservancy balance an unchecked white-tailed deer population while also protecting its investments in reforestation and forest regeneration; the Conservancy cannot do so without the assistance from land use and management agencies such as PGC, PA Fish & Boat Commission, the Farm Service Agency, and many more.

PGC strives to create and maintain public access for public hunting while also enhancing wildlife habitat. As a public Cooperator, the Conservancy receives funding and assistance from PGC for wildlife habitat improvements, access improvements, signage, and enforcement of rules and regulations by State Game Wardens and deputies.

Just as there is a long process for a property to become a preserve; there is also a long planning process that is worked through before a nature preserve is entered into Cooperative Agreement with PGC.

The Conservancy’s Welsh Mountain Nature Preserve represents the largest contiguous forest in Lancaster County with 916 acres open to public hunting. Once fully acquired, the Hellam Hills Nature Preserve will represent a similar scenario in York County. All in all, the Conservancy has entered at least one of its nature preserves into Cooperative Agreement in one PGC District in York, Dauphin, and Chester Counties, and in all three PGC Districts in Lancaster County.

More information on where to hunt can be found by visiting the Conservancy’s website at:

Or by visiting the Pennsylvania Game Commission’s website at:

The winter woods are full of their own type of won

Enjoy this Monday Moment of Zen, brought to you by

Even though we're approaching the mid-point of win

Is your business or organization looking for a gre

The Conservancy is very lucky to now have Peggy Ep

We are so excited to have launched the Habitat Adv

Time is running out to vote for local favorite, th

“Life’s most persistent and urgent question is