The Owl vs the Squirrel: Nature in Balance
Feb 18

The Owl vs the Squirrel: Nature in Balance

The woodpecker cylinder swung wildly in the night, while the other tube feeders remained still. I wasn’t sure what I was seeing. There wasn’t any wind to explain the motion, and just that one feeder rocked. I thought, “This could be a haunting!”, but the scientist in me kept searching for a more logical explanation. I kept the bird cam up on my computer screen and hoped to witness the cause. The woodpecker cylinder stopped moving and the entire feeding station was quiet again, in the dark, still, night-woods of Climbers Run. 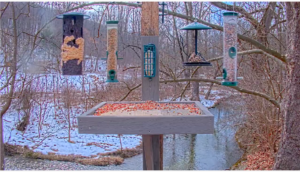 This feeding station, has a camera pointed at it that live streams video 24 hours a day to the Conservancy’s YouTube Channel. It is part of an effort to connect people with nature by bringing the incredible diversity of Climbers Run Nature Center directly into their homes. I am responsible for keeping the feeding station stocked with suet, seed, and peanuts, and so I tuned in nightly to check on the condition of the feeder, to see if it needed maintenance the next day.

That particular night, I was just about to turn my computer off and chalk up the wildly rocking feeder to a ghost, fluke or imagination, when a gray blur flew onto it from the left, sat there for a second, and launched onto the main 4 x 4 post feeder support for a second, then bounded back off camera to the left, leaving the empty woodpecker feeder, again, rocking violently. The nighttime visitor returned quickly this time, gliding in from a nearby tree, again landing on the 4 x 4 post, running up and down it a few times – enough for me to get a better look, and to admire the vigor of this small rodent. It never sat still for more than a few seconds. 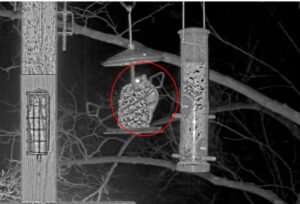 A flying squirrel lands on a feeder

This was a flying squirrel, though its name is a misnomer. They don’t technically fly, but rather use flaps of skin between their front and hind legs to glide from branch to branch (or in this case branch to feeder). They are like a furry version of the Red Bull wingsuit flyers. There are two species in Pennsylvania: the northern and southern flying squirrel. The northern flying squirrel only occurs in northern tier conifer forests and is listed as endangered in Pennsylvania. A study between 2003 and 2007 only found 33 northern flying squirrels in the state. The southern flying squirrel is much more abundant, and more common than we think, due to their nocturnal secretive nature. They can cover 150 feet in a single glide at a ground speed of around 8 miles per hour. They live in snags, woodpecker holes, and abandoned bird and grey squirrel nests. Multiple squirrels may live together through the winter for warmth. They are omnivorous and eat fruit, nuts, seeds, insects, birds, eggs and carrion.

I came to expect the flying squirrels each night and my ritual of tuning into the feeder cam became more for my enjoyment of watching their acrobatics, rather than the mechanics of checking on the condition of the feeder to define my work schedule for the next day.

I was grateful for the opportunity to witness the gymnastic athleticism of the squirrels as they ran up and down the feeder post, landed on and launched from the woodpecker feeder, and glided in from nearby trees. They seemed to encapsulate joy in motion, and if squirrels can’t experience joy, they can certainly spread it to others. I received joy from watching their aerialist skill mastery, and it didn’t take long before I became attached to the squirrels and their parkour antics. I looked forward to our virtual time together. They became my companions and comedic aerialist entertainers.

Then they disappeared. The feeder was silent for two nights before I investigated.

I had a bad feeling about what I might find as I hiked toward the large sycamore that towers over the feeder station. What if something had happened to my furry virtual friends? I searched the ground around the feeder, and sure enough, found what was left of a carcass. While it was half eaten, I could tell, based on its size and coloring, that I was looking at the remnants of one of the flying squirrels I watched these past weeks. I was sad to see the demise of one of the beings that had brought me some joy. I considered burying him but figured a more fitting final resting place was in the belly of a scavenging fox or coyote. I left the red mass alone, and wondered what happened, and worried it would happen again, if the other squirrels ever returned.

The squirrels slowly came back but they were timid and skittish. It was as if they had memory of the incident that took their companion. It took them two weeks to get back to normal parkouring antics.

And then, a comment came through on the bird cam’s YouTube page: “Thanks for putting the timestamp on the feeder cam Keith. It came in really handy for telling people where the owl tried to get the squirrel.”

We scrolled back through the previous night’s video and found where an owl tried to nab a squirrel. The owl came in as a blur on the video. The squirrel launched from the woodpecker feeder just before the owl attacked. The owl hit the feeder post and lost some feathers in the attempt. It all happened so fast, we had to slow the video down to really understand what transpired. I felt bad for the owl, and hoped it wasn’t injured, but was grateful for the miss. We were able to find where the owl struck another night, and also missed. We could see her eyes on a branch in the distance watching the feeder, waiting for what she thought was the right time to swoop in.

The squirrel’s hyperactivity suddenly made sense. Their rapid jerky motions and quick short gliding flights were tactics to avoid predation. 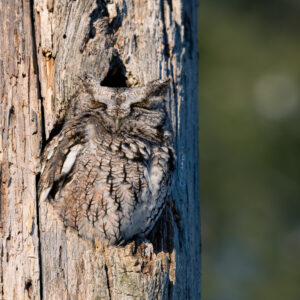 Our best guess from the video is that this owl was a screech owl – another misnomer of a name: they don’t screech. These small owls have two calls: a tremolo used to keep in touch with family members and a whinny used to defend territory. They are still common throughout their eastern US range, but have declined in some areas. Screech owls are the most common of the seven species of owl that live in Pennsylvania. They hunt from a perch and swoop in to catch their rodent or flying insect prey.

Their soulful haunting whinny is one of those piercing sounds that goes straight to one’s soul, like the call of a loon, coyote howl, or fox breeding yelp. It lets one know they are part of something big and grand and wild, and that even in this corner of the world, wildness is here.

While we tend to anthropomorphize wild creatures, there is no animosity here. The owl doesn’t hate the squirrel and isn’t trying to be mean – it’s just trying to eat, just like the squirrel is just trying to eat off the seed block intended for woodpeckers. There is no good or bad. It’s a circle-of-life kind of thing: the tension between life and death and the will to live. Though it does make for some exciting video.

I would miss the squirrels and their parkour antics if they were to cease. I would also miss the moving call of the owl. For now, they are in balance and I don’t need to be without either.