The Trail Will Connect Here
Apr 21

The Trail Will Connect Here

“The trail will connect here.” Steve Mohr, the Conservancy’s preserve manager pointed to where the new trail he marked through the Mueller Woods addition to Climbers Run Nature Center will intersect with the existing trails.

I spent the last two decades developing elaborate programs designed to connect people to nature with the assumption that once connected, action to protect the natural world will follow. Two years of graduate research on the same topic led me on a convoluted journey through a labyrinth of theory and complicated practice to conclude right where this simple statement landed: “The trail will connect here.”

My research showed that one of the keys to inspiring action was getting people outside – and the Conservancy’s trails do just that – and much more. 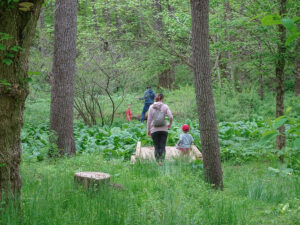 A family hikes together at Climbers Run.

That same day at Climbers Run, two little girls ran down the grassed trail towards the wetland. Their bright blue and purple raincoats glowed against the grey mist. Soon their moms followed, holding the hand of a little brother. A volunteer land steward crew gathered to start construction on the expanded Climbers Run trail system. They would connect with each other, the way volunteers do, as they worked in the light rain to dig in the trail tread surface. Two hours later they were making plans for their next trail construction adventure, and sharing the camaraderie that comes from working toward a common good.

Two days later I watched numerous young families in the Kelly’s Run parking lot. Some had infants in packs. Others had toddlers a few steps ahead or behind. It brought back memories. I raised my family here. This was the first hike where I carried my daughter in one of those back packs. She is in Arizona now preparing to through-hike the Pacific Crest Trail. I have two pictures of my older son taken from the trail at the same slab of schist that overlooks the river between Kelly’s Run and the Pinnacle. The first was taken when he was six. The second when he was 16. It is time to get a third now that he is about to graduate college. I have another photo of me and my two sons that was taken deep in the Kelly’s gorge. We need to repeat that one too, before they are out on their own trail adventures. When I think back on their childhoods, memories of our hikes bubble to the surface and bring a faint smile on days when I miss those simpler times. I am connected to Kelly’s because of my experiences on her trails, and those shared experiences are part of the bond I have with my family. 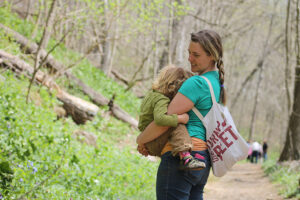 A connection on the trail at Shenks Ferry. Photo: Michelle Johnsen

I briskly hiked the Shenks Ferry Wildflower Preserve trail just to check on its condition during the peak of spring ephemeral season, that window of time between the end of winter and canopy leaf-out when all the spring “ephemerals” make a run for the sun, while they can. The trail was busy on this weekday morning, and groups of retired friends streamed past. Many didn’t know the names of these ephemeral beauties, and I was happy to point out a few. But that didn’t matter. The flowers drew them together and the trail led them on a colorful exploration that joined them to this place and each other.

Back at Climbers, I led a Cub Scout pack on a hike on the new trails. Scouts ran ahead and were enthralled with the spring wildflowers and the insects that pollinate them. The skunk cabbage and dark metallic blue sawflies, the trout lily, may apples and Dutchman’s breeches and the queen bumble bees attracted to their white and yellow blossoms. The Scouts became connected to this place, the life that calls it home and, I assume, each other.

A week later, I worked at my desk in the Climbers Run barn on a grant report and glanced up to see a family walk on new trails installed just days earlier. I remembered the camaraderie among the volunteer land stewards who installed this new trail section, the discoveries made by the Cub Scouts and retirees. I remembered the connections formed.

The trail will connect here – indeed.

Your Support is Needed Now!

Give a gift between Earth Day & Arbor Day

Your Lancaster Conservancy membership connects you to a community of fellow hikers, naturalists, anglers, hunters, scientists, and families that understand the value of keeping our lands wild and our trails open. Give a gift between Earth Day (April 22) and Arbor Day (April 30) to help raise the $40,000 needed to expand and steward our network of trails and nature preserves that are vital for our community and nature to thrive.

Your gift ensures both current and future generations will benefit from the land we save, the trails we create, and the habitat we restore.