“This Was the Best Day”: Connecting our Community to Nature 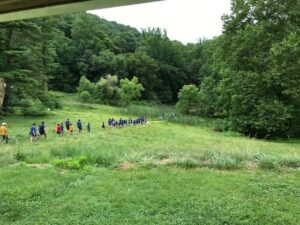 Kindergartners from School District of Lancaster and Lancaster County Parks and Recreation set out to explore Climbers Run.

They poured out of the bus and onto the back porch of the Climbers Run Nature Center barn – thirty kindergarten students from a summer program through the School District of Lancaster and Lancaster County Department of Parks and Recreation that’s dedicated to providing neighborhood based learning opportunities for all ages. This was the first of a series where each Wednesday over the course of five weeks we would introduce 50 students to the wonders of Climbers Run specifically and nature in general.

The “I need water” and “I need a bathroom” requests came flying at us fast, as we were quickly reminded of what is like to serve little ones. We scrambled to get water and formed lines for bathrooms.

Meanwhile, students not engaged in either water intake or removal marveled at the life around the barn – or to be more accurate, shrieked at the life around the barn – the wasps and spiders. I never minded these reactions. Getting students’ attention is half the battle, and if they are screaming out of unfounded fear at something, that something already has their attention. I always looked at these events as opportunities to teach. And so we did. We taught about wasps and spiders and let students get close enough to really investigate these creatures. The shrieks of fear turned to awe (but, truthfully, not before one unlucky spider got stomped before we could intervene). 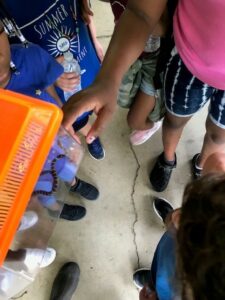 Almost as if on cue, a toad hopped across the concrete porch.  Even more chaos. Shrieks and screams and poorly aimed lunges to try to capture the little amphibian. I intervened and snatched the juvenile American toad into my hands so that I could gently hold her while students admired and timidly touched her head.  Shrieks turned to whispered “Oooh I touched her!”  I heard one little girl say, “I never touched a toad before”.  Another said “I never saw a toad before”. Two of the saddest statements I have heard.  Sad that these kids never experienced something I did commonly as a kid.  Scooping up toads and feeling their dry durable bumpy skin against my soft hands. Looking into their deep gold flecked eyes.  Feeling the pee released as a defense dampen my palm.  There is a deficit there.  Those experiences with nature, common nature like toads, did something to me.  They inspired awe and wonder and made the world an endless place of miracles to explore.  They formed relationships, kinships that prevented loneliness.  These kids didn’t know the joy that comes from this kind of experience until today, and it made me smile to know that we had made it possible.

Two weeks earlier, a group of students from La Academia school hiked the trails at Climbers with their cell phones out, ready to photograph whatever life they saw.  This was part of a multi-week project where middle school students documented the biodiversity at Climbers as they saw it. Tiger beetles, toads, and blood root wildflowers dominated this hike though most students were drawn to the tiger beetles bright metallic emerald green color. They had to learn the insect’s behavior and thresholds in order to anticipate the beetle’s next move.  They had to learn how close they could get before the beetle flew, in order to get the perfect shot. And in the process of observation they connected.  Theirs weren’t shrieks of fear. They were excited.  “Mr. Keith look at this shot!” 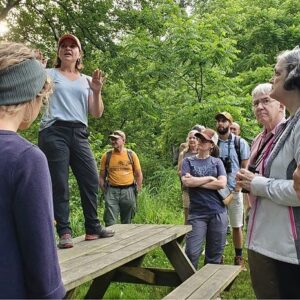 In stark contrast to these high-energy, high-volume encounters, Climbers Run was also recently the site of a beginning birding class led by one of the Conservancy’s dedicated volunteers, Sarah Gotwols. After joining us on numerous interpretive hikes, that covered everything from vernal pools to spring ephemeral wildflowers to insects, we were thrilled to have her lead 30 people through the basics of how to find birds, and how to ID them based on size, shape, habitat, sound and color. The crowd got quiet when she pointed out the wood thrush call that sweetly dripped from the trees like honey. “We have seen a 60 percent decline in these birds due to habitat loss.” Sarah said as the sweet notes faded.  The silence stung, a premonition of what might come if we aren’t careful. If we aren’t paying attention and making the right decisions.

It’s been a good, busy, couple of months for our Community Impact team.  We brought nature interpretation to the community by running 38 interpretive events spread across the York and Lancaster County landscapes the Lancaster Conservancy works to protect. We gave connecting nature experiences to 813 people from preschoolers to retirees, many who otherwise would have never had the chance for these kinds of experiences.  From interpretive hikes to school classes, we marveled at the beauty and ingenuity of spring ephemeral wildflowers, explored streams, even probed life under logs.  Each of these experiences helped tell the story of the importance of protected land, and our connection to it all.

When it came time to gather our kindergartners visiting Climbers Run to head back to their busses, it was quite a struggle. They were too engaged in looking for and marveling at life to be bothered with a closing circle.  One student noticed a spider scrambling across the meadow and instead of screaming and squishing it, they admired and stepped over. At first blush, this trip didn’t feel like life or death – it’s just conservation education that looks like a simple nature hike.  But it was promising to see kids protect the same things they were intentionally trying to snuff out an hour earlier.

We were finally able to break their attention away from the new life they experienced and move them toward the bus. As we walked back up the meadow hill toward the barn a little girl looked up at me and said, “Hey Mister, this was the best day.”  Yes, it was.