Your Woods in Autumn: Top Ten Things to See on Fall Hikes
Sep 20

Your Woods in Autumn: Top Ten Things to See on Fall Hikes

Scientifically speaking, it is the 23.5-degree tilt of the earth that gives us our seasons, and in autumn, that tilt takes us away from the sun. We experience this shift as shorter days, longer nights, and cooler temperatures – the start of fall. As the heat of summer gives way to the cool of autumn, you may feel a call to get back out into the natural world – and for good reason! Here are the top 10 things to see on a hike in the autumn woods. 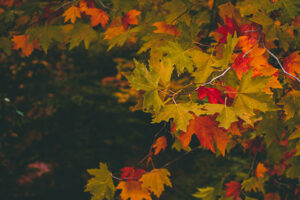 The green in leaves comes from chlorophyll, a miracle molecule with the ability to combine the sun’s energy with carbon dioxide and water to make oxygen and carbohydrates. Leaves are carbohydrate factories. Now, as this half of the earth tilts away from the sun causing short days and chilly nights, the carbohydrate factories stop production and chlorophyll breaks down. Now the other chemicals, carotenes and xanthophylls usually masked by the green chlorophyll the rest of the year, have their time to shine. Some of our most prolific trees – maples, sassafras, and tulip poplars – turn red, orange, and yellow, respectively.

The trees aren’t the only thing blazing with color. Acres of goldenrod transform the green meadows on our preserves to a bright yellow and gold. There are more than 100 species of goldenrod in north America, and they fill the critically important role of providing pollen and nectar to help pollinators through their wintertime journey, whether that is hunkering down and riding out the cold, or migrating thousands of miles away from it, like monarchs. 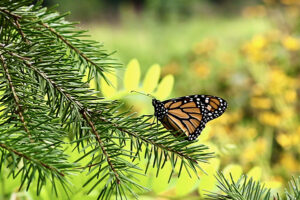 A monarch rests on a fir tree.

Monarchs are gathering over meadows on Conservancy preserves in preparation for a 2500-mile flight to their wintering grounds in Michoacán Mexico where they will roost in oyamel trees by the hundreds of thousands until March. These butterflies have just emerged from their chrysalis and are fresh looking. Their wings bright and unscathed. They will most likely be the ones to make the flight back to Mexico where their great, great, great, great, grandparents started last March. The first generation probably got as far as northeastern Texas before they stopped to have the next generation who carried the migration forward, and so on, moving north, until the fourth or fifth generation emerged in our area, and is now bulking up on nectar from goldenrod in preparation for their long flight south. 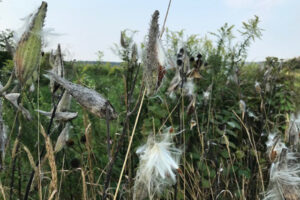 Milkweed looks like rubber plants, with stout flexible stems and large paddle leaves. When you snap a leaf, it exudes a white sticky latex sap. The sap contains cardeneloids, chemicals toxic to most insects and birds. Monarch caterpillars have adapted to not only eat the milkweed and deal with the cardeneloids but concentrate them so that they become toxic morsels to any predator that wants to eat a monarch caterpillar or adult. This explains the bright color of the adult. It’s a warning that they are toxic, thanks to the milkweed. At this point in the year, milkweeds are spent, and their flexible green foliage has turned grey and brittle. Spiny pine cone sized seed pods split open and brown seeds on gossamer silk parachutes float through the meadow, hopefully establishing more monarch summer habitat wherever they land.

Monarchs aren’t the only ones taking flight to migrate. Preserves are safe havens for migrating birds too. The habitat they provide for insects is just as important for birds. Flocks of thousands of red-winged blackbirds, cowbirds, grackles and starlings move through the forest canopy like a giant amoeba. They pulse in coalesced murmurations, shape shifting clouds of feathered life, and peel across fields and meadows, each guiding off the other and somehow not colliding. Their wing beats and calls hush all other sounds.

Just above the blackbird swarms, kettles of vultures swirl higher in the sky as they ride rising plumes of air warmed by the sun hitting the land. These are black and turkey vultures, year-round residents who seem to become more apparent in the fall. The turkey vulture’s ability to sniff out gaseous byproducts of death and decay in the part per million range give them one of the most sensitive senses of smell on the planet. 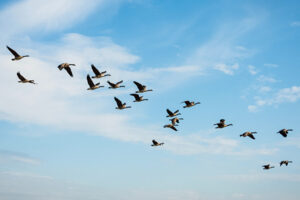 Geese fly in more organized flocks than vulture kettles: V’s pointed south for the winter. They fly in a V to conserve energy by drafting off each other, which increases the flocks overall flying range, and to keep an eye on each other. If a goose becomes sick and must leave the formation, two others escort it and stay with it to protect it until it can resume the flight or die. The leader, who bears the brunt of wind resistance and works the hardest, rotates so that a new leader emerges when the existing one tires. The honking we hear above, we think, are the geese encouraging each other.

One day much later in fall, after the blackbirds and geese have left for the winter, the first frost will coat everything in a crystalline dust. The woods and meadows become silent. Insects are ectotherms, so their activity stops when it gets too cold. All the chirps, buzzes, and whirrs that filled our preserves for months suddenly halts like someone flipped a switch and the woods and meadows feel still and lonely with the deafening silence. 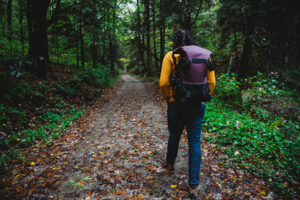 The fall woods and meadows fill with people as we head outside to soak in the colors, breathe in the rich leaf mold aromas, and breathe out the stresses we accumulate in our daily lives. Notice each other. Say hello. These folks are a growing community of conservation activists, proponents, and practitioners. As you are looking at (and out for) each other, you should notice a lot of orange.

Hunters wear orange. So should you! Many preserves allow hunting of one form or another, and hunter orange keeps you safe any time you are in the woods. So grab an orange beanie or throw on an orange vest as we safely and respectfully share our woods and our trails with all outdoor enthusiasts this fall!